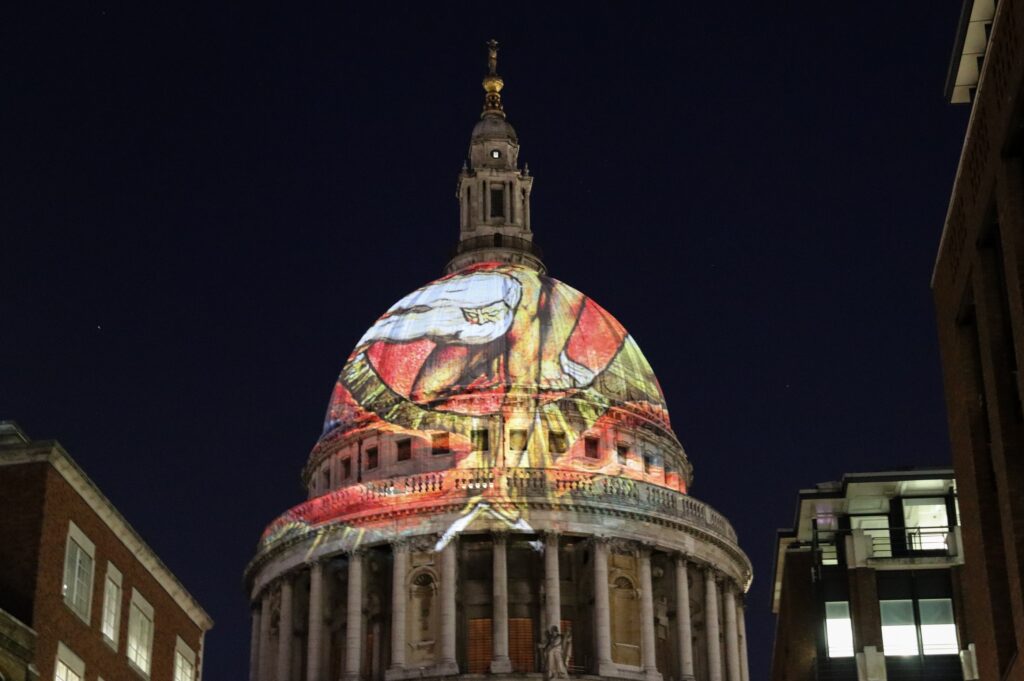 Bunhill Fields, where Bayes, Blake, and Bunyan are laid to rest and whose works still echo throughout the City. In late 2019, many hundred-thousand folk admired William Blake’s Ancient of Days projected on St Paul’s Cathedral dome. Every year, millions breathe life into his verse, Jerusalem.

John Bunyan’s The Pilgrim’s Progress is an allegory and first novel written in English. In print for centuries, translated into two hundred languages, and counted among Franklin Library’s 100 Greatest Books of All Time. The protagonist is an everyman character, and the story concerns his journey from the City of Destruction to the Celestial one. It’s a story of faith.

Our endeavours, ambitions and industry would amount to naught without that proactive confidence, nor without confidence others lend us.

In considering a new name for the school both my father and I attended – separated by one procession of Saturn – the image that stands above all others is of the late Professor Shelagh Heffernan. Those who knew Shelagh will testify to her respect and passion for proper learning.

She and I failed to see eye-to-eye on everything, but that didn’t blunt her faith in me. I benefited from her generosity and belief, and witnessed the egalitarian devotion reserved for each of her tutees. Sadly, Shelagh’s husband, Professor Peter Sinclair, succumbed to ‘Covid’ last year. Upon remembering him, I recalled the first speech David Cameron gave to the City as Conservative party leader alongside Osborne. If not the Remembrancer, then who invited them to use Sir John Cass Business School for their seminal address? The Electoral Commission, next door? No. Peter was Cameron’s tutor at Oxford.

Shelagh’s requiem service was held at St. Bartholomew’s on Winter Solstice a decade ago. There, with my back to a stone-cold wall, I turned to read an inscription in marble:

A tradesman’s hand reminding me to be sure-footed; to reflect without dwelling, and accept life’s pilgrimage with a glint something like seen in Blake’s illustration of The Pilgrim’s Progress – painted a century after Bunyan’s ink had dried.

Cherubim stir memory that we might perfect the past: